Since quarantine is making all of us stay at home for a big part of our time, we have decided to help you in passing time by recommending you our favorite TED Talks and documentaries!

Have fun listening and watching!

The documentary film shows Leonardo DiCaprio visiting various regions of the globe exploring the impacts of global warming. He meets with scientists, activists and world leaders to discuss the dangers of climate change and possible solutions. His collection of interviews in the film – ranging from Barack Obama and the Pope through to Elon Musk and Piers Sellars – cover the science, impacts, vested interests, politics and possible solutions. 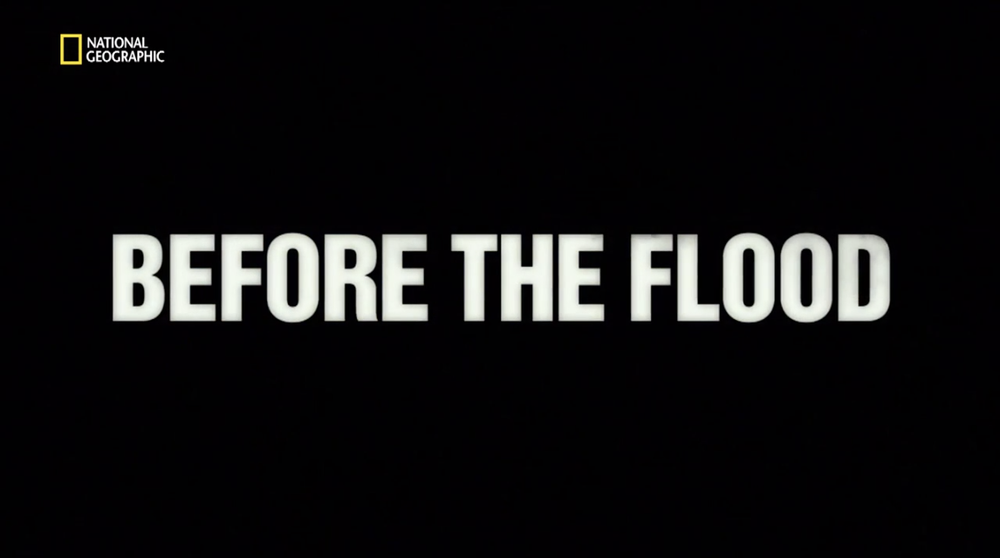 In this documentary, Andrew Marr is asking how our megacities can survive without having a colossal heart attack.  Andrew Marr looks at transport routes. Motorways, the freeways, the railways below us are the veins and the arteries. But all round the world, these arteries are getting clogged up and congested. Andrew Marr pedals a rickshaw taxi in Dhaka, flies with Mexico City’s airborne traffic crops, and rides a high-speed magnetic railroad in Shanghai. 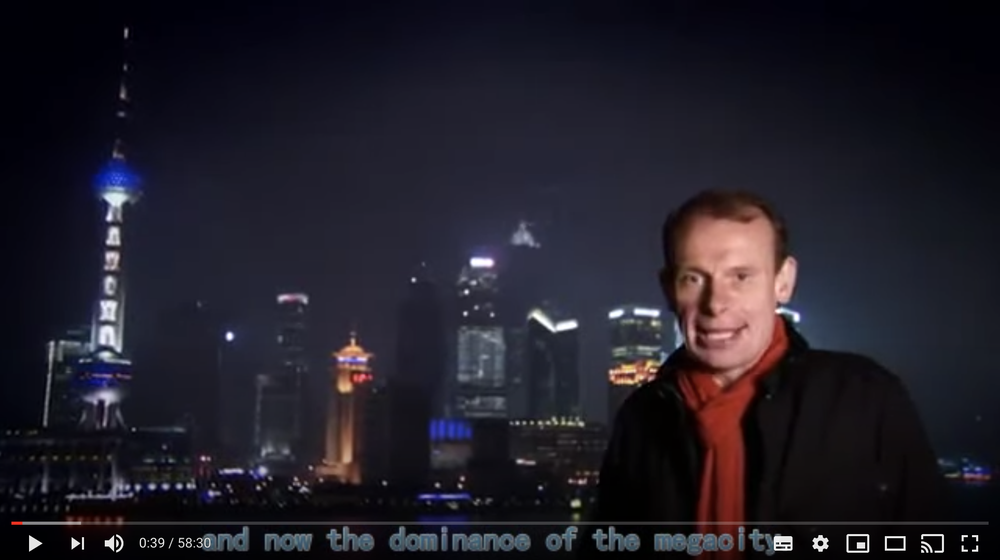 In his TED-talk Hans Rosling is showing the facts about population. Up-to-date statistics show that recent global progress is ‘the greatest story of our time – possibly the greatest story in all of human history. The goal of eradicating poverty seems unrealistic to many highly educated people because their worldview is lagging 60 years behind reality. 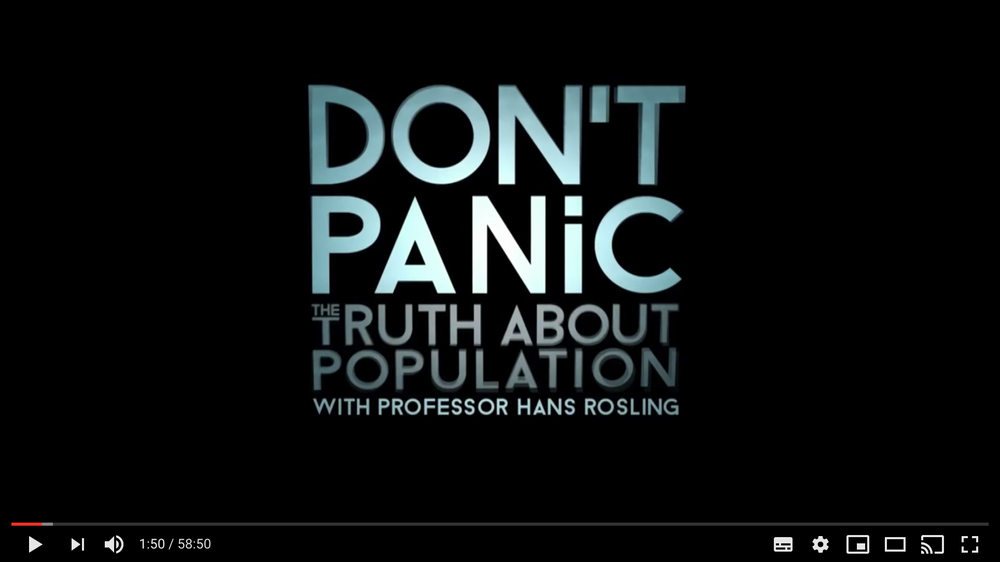 By the year 2050, the world’s population will reach nine billion. The demand on the world’s resources – energy, first and foremost – will be severe. But the road from now to then doesn’t need to be bleak. There is a path to a future filled with opportunities, with amazing individuals and extraordinary projects leading the way. 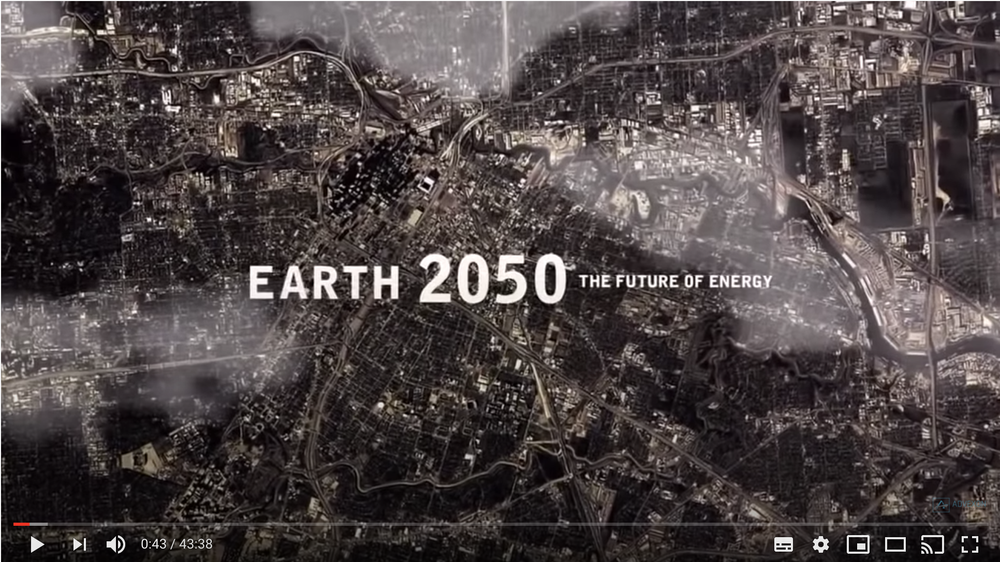 The surprising math of cities and corporations (17:33 min)

Physicist Geoffrey West has found that simple, mathematical laws govern the properties of cities -- that wealth, crime rate, walking speed and many other aspects of a city can be deduced from a single number: the city's population. In this mind-bending talk from TEDGlobal he shows how it works and how similar laws hold for organisms and corporations. 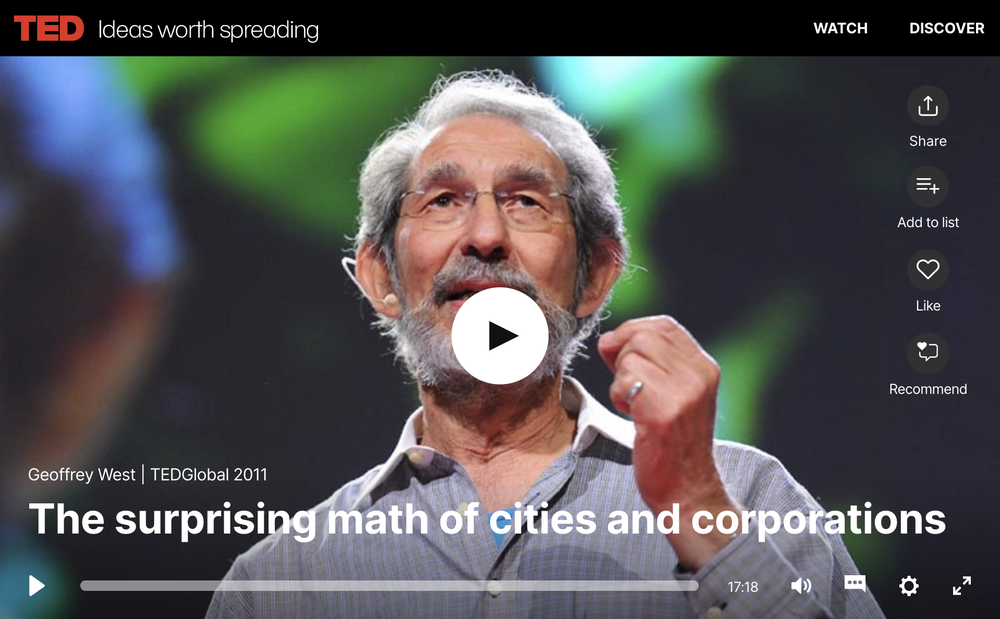 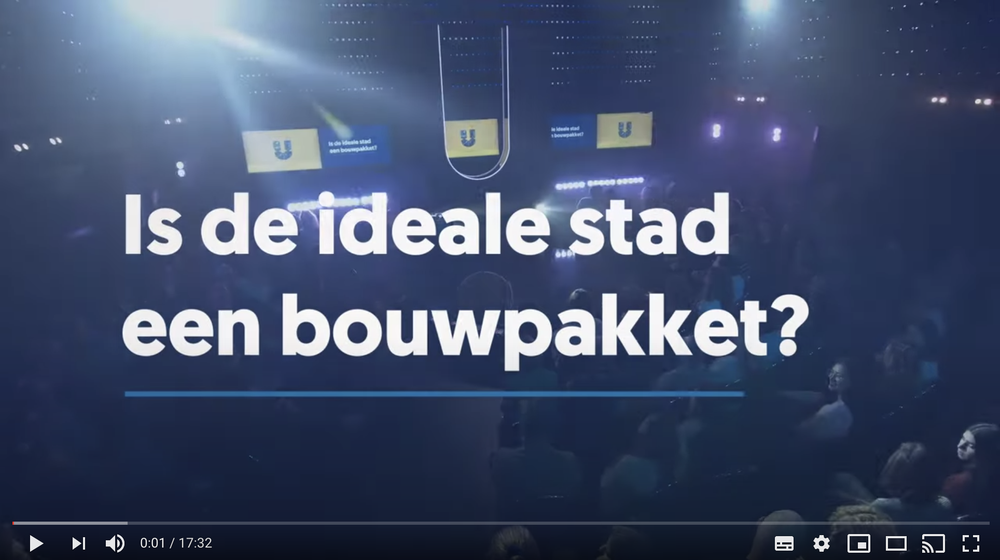 "Ideas change the world," says historian Rutger Bregman. He advocates a provocative idea: the guaranteed basic income. It is 500 years old and a forgotten contemporary experiment showed that it works. Imagine how much energy and talent we can release if we can eradicate poverty once and for all. 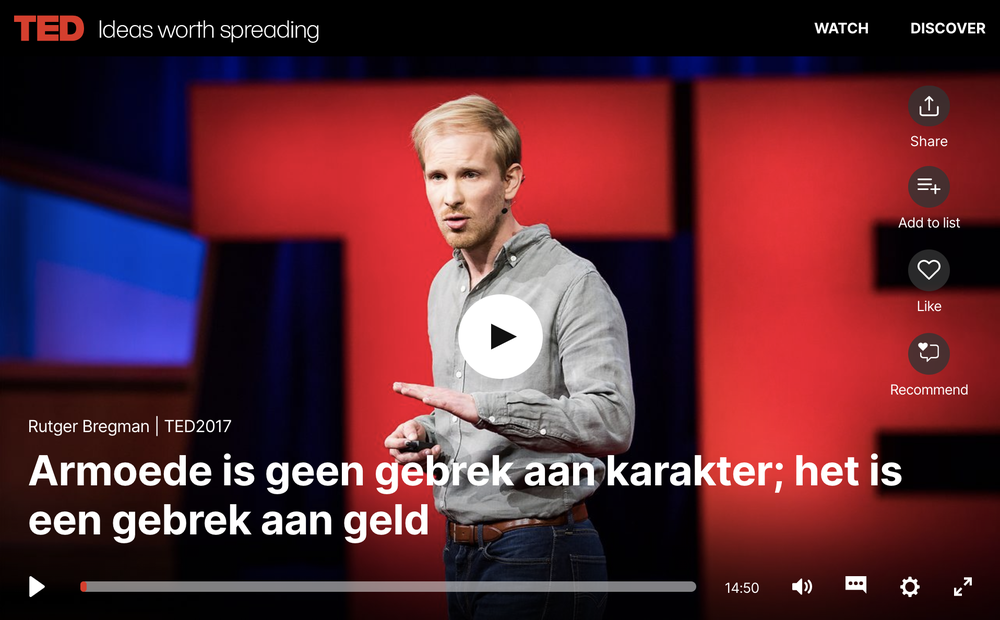 More than half of the world's population already lives in cities, and another 2.5 billion people are projected to move to urban areas by 2050. The way we build new cities will be at the heart of so much that matters, from climate change to economic vitality to our very well-being and sense of connectedness. Peter Calthorpe is already at work planning the cities of the future and advocating for community design that's focused on human interaction. He shares seven universal principles for solving sprawl and building smarter, more sustainable cities. 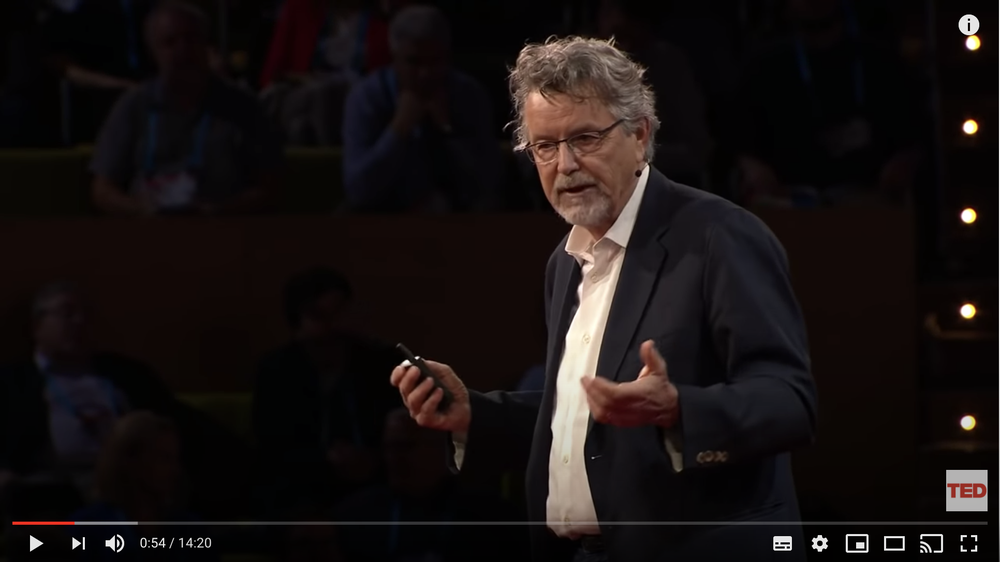 Bees have been rapidly and mysteriously disappearing from rural areas, with grave implications for agriculture. But bees seem to flourish in urban environments -- and cities need their help, too. Noah Wilson-Rich suggests that urban beekeeping might play a role in revitalizing both a city and a species. 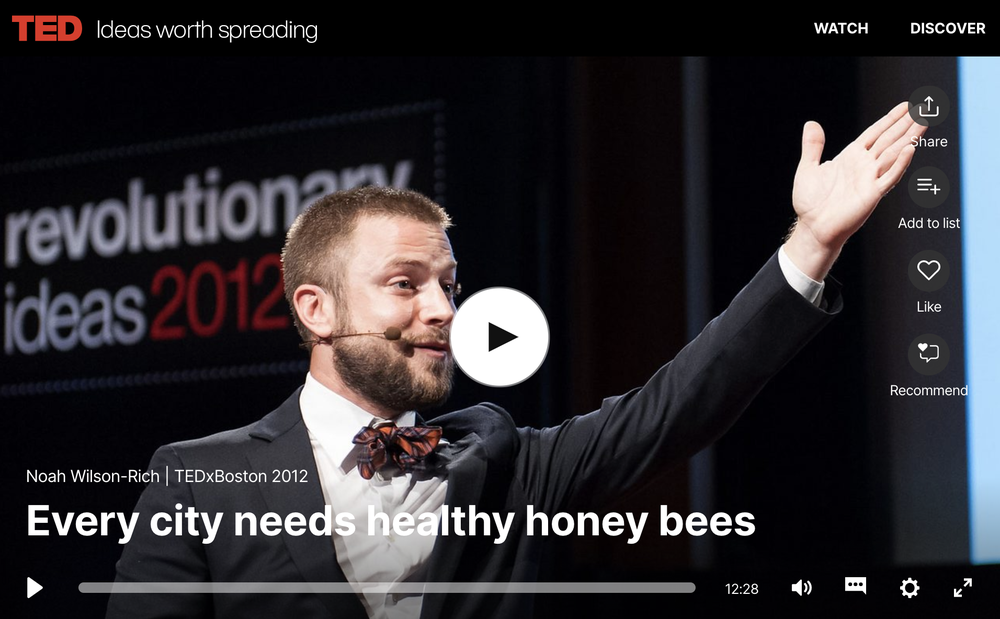 There's a creeping sameness in many of our newest urban buildings and streetscapes, says architect Vishaan Chakrabarti. And this physical homogeneity -- the result of regulations, mass production, safety issues and cost considerations, among other factors -- has blanketed our planet in a social and psychological homogeneity, too. In this visionary talk, Chakrabarti calls for a return to designing magnetic, lyrical cities that embody their local cultures and adapt to the needs of our changing world and climate. 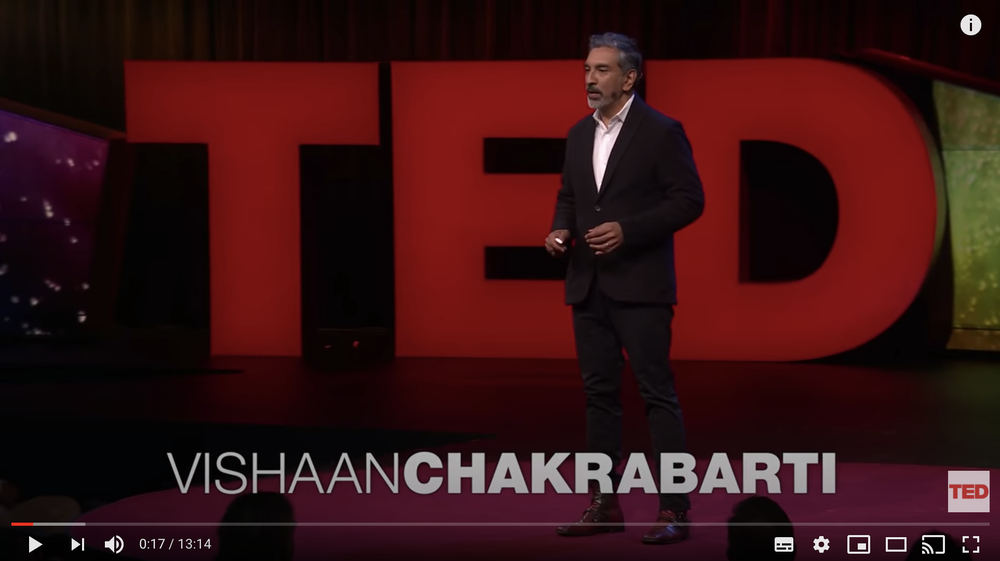 A smog vacuum cleaner and other magical city designs (12 min)

Daan Roosegaarde uses technology and creative thinking to produce imaginative, earth-friendly designs. He presents his latest projects -- from a bike path in Eindhoven, where he reinterpreted "The Starry Night" to get people thinking about green energy, to Beijing, where he developed a smog vacuum cleaner to purify the air in local parks, to a dance floor that generates electricity to power a DJ booth. Check out Roosegaarde's vision for a future where creativity is our true capital. 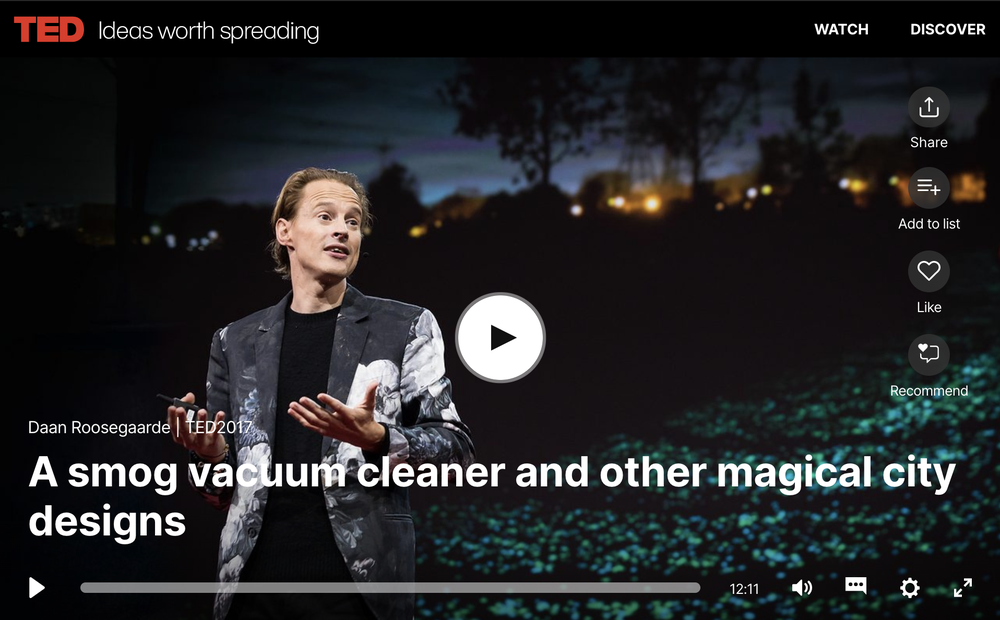 When a squirrel chewed through a cable and knocked him offline, journalist Andrew Blum started wondering what the Internet was really made of. So he set out to go see it -- the underwater cables, secret switches and other physical bits that make up the net. This in relation to the physical world. 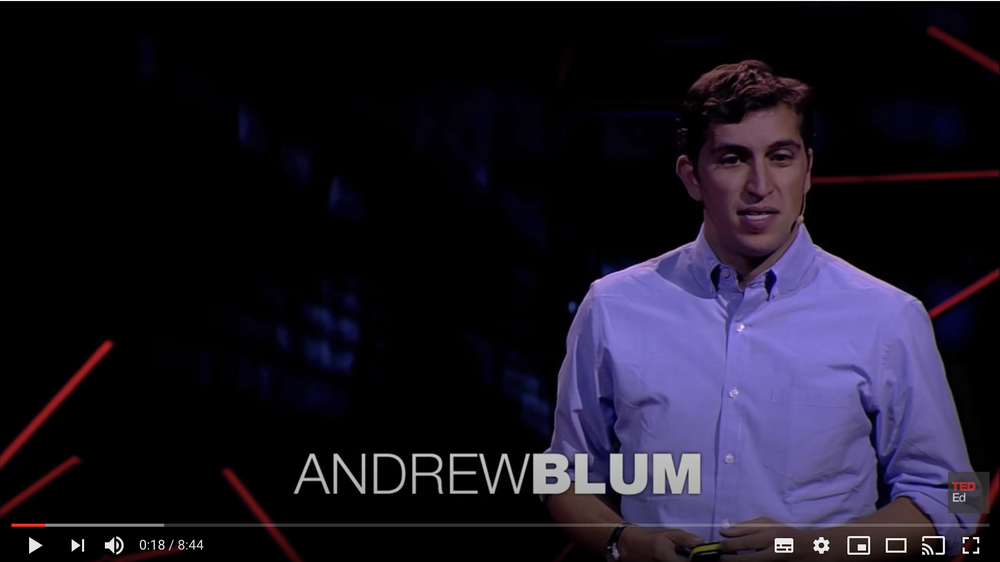 Mapping apps help us find the fastest route to where we’re going. But what if we’d rather wander? Researcher Daniele Quercia demos “happy maps” that take into account not only the route you want to take, but how you want to feel along the way. This Ted talk brings some new ideas into cartography and makes us wonder if efficiency is really what we desire to make us happier. 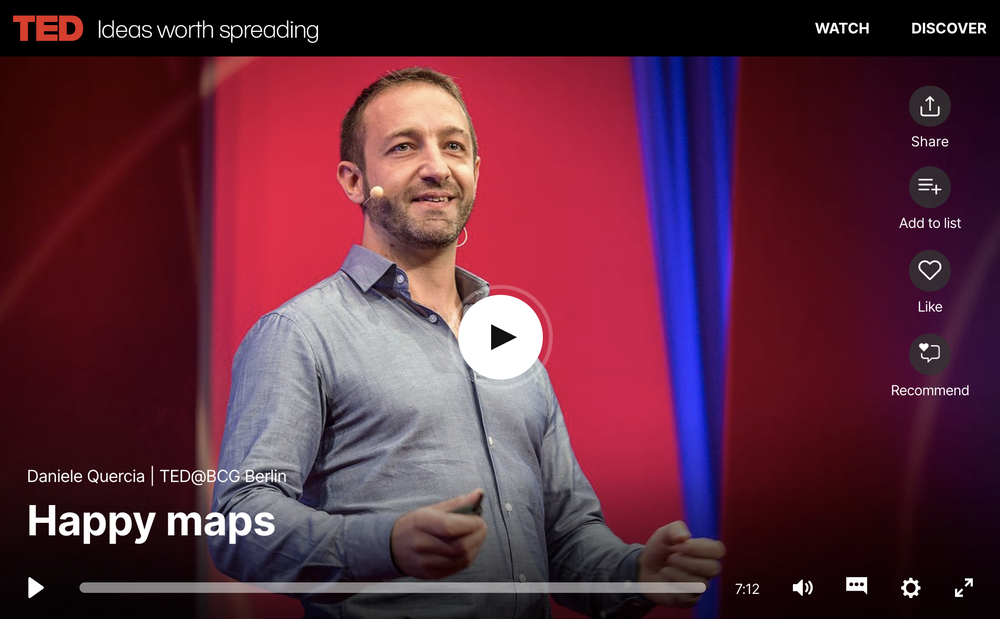